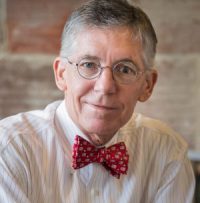 Matt Walsh is one of seven children born to George & Janice Walsh in St. Louis, Missouri. When a professional baseball career with the Kansas City Royals didn’t pan out, he decided that being a sports writer would suffice. While attending the University of Missouri Columbia School of Journalism, Walsh held an internship with Sports Illustrated following baseball teams around the country.

Also at the J School at Mizzou, Walsh met his future wife, Lisa Beliles, who was enrolled in the advertising program and third-generation newspaper girl. After their marriage they embarked on their community newspaper career in the Midwest. While working at Daily Register in Brookings, S.D., a snowdrift hit the second floor of their townhouse and Lisa decided it was time to move to Florida.

Matt took an editing job on the business desk at the Miami Herald in 1980 during the height of crime and worked along colleagues Dave Barry and Carl Hiaasen. A highlight was when Kurt Russell used Matt’s desk during filming for his role in the 1985 movie, “The Mean Season.” After experiencing too many burglaries, the Walshes decided it was time to move somewhere safer for their two young daughters, Emily and Kate. Walsh accepted the position of Editor of Florida Trend Magazine, based in St. Petersburg, Fla., in 1986 and remained there until 1994. While at Florida Trend, Walsh first exposed his daughters to the media and publishing business letting them run around the hallowed halls of the St. Pete Times Building and unknowingly allowing them to steal candy off his colleagues’ desks on Sundays when he was editing stories for the upcoming issue.

Matt was recruited by Forbes Magazine in 1994 as the Southeast Bureau Manager where he worked remotely out of their garage in St. Pete. Walsh’s daughter, Emily, recalls having to patch important phone calls through to his garage office including the likes of current President Donald Trump, “Dad!!!! Donald Trump is on the phone!” Forbes eventually required Walsh to work out of the New York City or Atlanta office. After exploring options, Walsh’s entrepreneurial nature got the best of him when the opportunity to own a newspaper on a sleepy 10-mile island spanning Manatee and Sarasota counties presented itself. Walsh called up his father-in-law, David Beliles, who had recently retired from a 42-year career in the newspaper industry and asked, “Ready to go back to work?” Walsh, his wife, Lisa, in-laws David and Ruth Beliles and group of investors purchased The Longboat Observer in 1995.

Nearly a quarter of a century later, Walsh and his wife have grown the company to employ more than 125 people and one of the largest family-owned and operated community media companies in the state of Florida.

Committed to high journalistic standards, Walsh requires high-performance of his employees and inspires them to reach for the stars with his motto: “Ad Astra!” Sending a weekly “Thought for the Week” to all employees and conducting quarterly all company meetings where he highlights employee milestones like anniversaries, birthdays, weddings, births and how they “Make a Difference,” showcases how Walsh considers everyone employed at the Observer Media Group a member of the family. Those high standards have been demonstrated for many years in the FPA Weekly Newspaper contest, as the Observer Media Group usually carries home more awards in than any other weekly organization in Florida. The awards are merely a reflection of the service Matt’s papers provide to their communities. Serving others, sometimes even at the cost of profit margins, is a hallmark of each of Matt’s papers.

Not only dedicated to his company and employees, he is an ambassador to the communities he serves with humble commitment. Walsh has coached several T-ball and 5-and under soccer teams. He is a reader at his church St. Mary Star of the Sea on Longboat Key. He has served as a board member and chair of many of the following organizations — Longboat Key Chamber of Commerce, St. Armands Association, Longboat Key Kiwanis, Longboat Key Kiwanis Foundation, Sarasota Ballet, American Jewish Committee Gulf Coast, Gulf Coast CEO Forum and the American Court & Commercial Newspaper organization. He also served on the board of directors of FPA for many years and was its chairman in 2012. Walsh is a member of Leadership Florida Cornerstone Class X. His awards and achievements include Longboat Key Kiwanis Citizen of the Year, American Jewish Committee Civic Achievement Award and the Economic Development Corporation of Sarasota County Clyde Nixon Business Leadership Award.