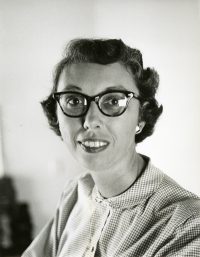 Anderson spent more than two decades at the Miami Herald where she wrote the popular column, “Monday Musings” and had a significant impact on her community. She encouraged women’s clubs to take on important projects and she assigned her reporters to explore local issues.

Anderson was also heavily involved with the Florida Women’s Press Club. Letters show her contributions to the organization’s bylaws and the award competition in the 1960s. She was committed to Florida journalism.

Further, Anderson was a national figure in journalism. She won so many Penney-Missouri Awards during the 1960s (the women’s page top recognition) that she was retired from the competition and instead served as a consultant. These competitions included a multi-day workshop. Her annual presentations influenced numerous women’s page journalists from across the country.

In a national 1967 presentation, Anderson told other women journalists to “de-emphasize society activities and emphasize events and features of interest to the whole community.” It was a topic that Anderson and Arizona women’s page editor Maggie Savoy had been trying to change for years – one that they had expressed in their 1963 Associated Press Managing Editors research. The women also presented their findings at the APME convention.

In addition, she was one of only four women’s page editors included in the Washington Press Club Foundation oral history project. Her papers are part of the National Women & Media Collection in Missouri which have provided some of the most significant material about women’s page journalists from the 1940s through the 1970s.

For much of women’s page history, society coverage was of the upper-class, but it was beginning to change under the watch of these women’s page editors emerging from a post-World War II Florida. In a 1964 Editor & Publisher article about Anderson, she said women’s sections were covering less society news and more hard news. “We need to operate a little more like the city desk,” she said. She emphasized that the trend in women’s pages was to play down society news. In another speech, she urged women’s page editors not to forget the subject that was at the heart of the sections. She wrote: “There is still a mighty fertile field for the encouragement of good reporting about the subject ‘women.’ She is a big subject—and she’s not likely to yield her identity or place in the sun, which grows larger with every week and month.”

Anderson syndicated the “Washington Offbeat” column in her Herald women’s section. Longtime government employee Catherine East subscribed to the Herald from Washington, D.C., and then sent copies of the women’s pages of the Miami Herald to other women’s liberation leaders across the country – serving as a kind of wire service. When the White House initially refused to release the report from the Task Force on Women’s Rights and Responsibilities, Anderson ran parts of it in her women’s pages – the first newspaper in the country.

Anderson’s former boss Herald publisher Lee Hills called her “a leader of the transition from the traditional women’s section to the modern living section.” Her obituary noted that she was “an editor who took chances, often publishing stories on subjects that were not popular.” Her groundbreaking approach led to a change in women’s roles at newspapers and the content aimed at women.