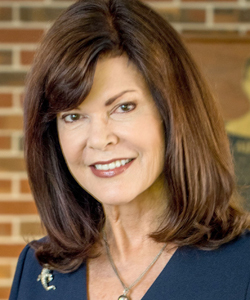 A true journalist at heart, Diane McFarlin is one of the most respected and successful media leaders in Florida and beyond.

McFarlin not only ran one of the most successful and award-winning newspapers in the New York Times Regional Media Group; she also spearheaded philanthropic endeavors that changed lives in the communities she served, and transformed one of the nation’s leading journalism schools at a time of incredible disruption in the media landscape.

McFarlin’s first foray in the news business was when she was 16 years old. Bored with babysitting, McFarlin sought out a job at her hometown paper, the Lake Wales Daily Highlander. There she began her first reporting job covering the county commission, school board, police beat and other newsroom roles throughout high school and college. She ultimately graduated from the University of Florida in 1976 with her Bachelor of Science in journalism.

After college she began her professional newspaper career as a reporter and copy editor at the Sarasota Herald-Tribune. There she rose through the ranks of the male-dominated newspaper at a time when there were very few women in leadership positions. She became managing editor at just 30. Three years later she was named executive editor of the Gainesville Sun.

McFarlin returned to Sarasota in 1990 as the executive editor of the Herald-Tribune, then a New York Times Regional Media Group newspaper, and was named publisher in 1999.

McFarlin greatly diversified the editing and reporting ranks of the newspaper and added considerable talent. Under her 13-year leadership, the Herald-Tribune was an industry leader in digital innovation, and she started one of the nation’s first 24-hour television stations to complement both print and digital.

Debra Jacobs, president and CEO of The Patterson Foundation says, “From being editor to publisher, Diane demonstrated the importance of local journalism. She worked not to be popular or powerful, but to strengthen community based on facts.”

McFarlin further strengthened the Sarasota-Manatee community by spearheading and starting the Season of Sharing campaign with the Community Foundation of Sarasota County, which supports those facing unexpected financial crises to regain stability. McFarlin encouraged collaboration and inclusion of all media organizations — newspapers, magazines, TV and radio — to help further the reach of the campaign. Since the initial launch of the campaign, enhanced with additional donations from the Patterson Foundation and the William G. and Marie Selby Foundation — but with millions coming from the everyday people, many of them helped previously by the program —
Season of Sharing has distributed more than $30 million to more than 35,000 families and individuals.

“As a young up-and-comer in the media industry, despite working for a competitive company, Diane took me under her wing and showed me how to be a true leader,” says Emily Walsh, publisher with the Observer Media Group. “She taught me that collaboration is the key to earning industry respect. And she has my utmost admiration for
proving that is truly the path to success.”

“Diane has always had considerable prestige in the Sarasota region and throughout the state, and it’s not because of any position she has held. It’s simply because her mix of poise, intelligence, wisdom, heart, and moxie leaves anyone who interacts with her simply awestruck,” said Matthew Sauer, the former general manager and executive editor of the Herald-Tribune and Gannett’s former Florida regional editor.

Tom Tryon, who served under McFarlin as opinions editor and before that in various roles in the editorial and news departments, said she is the “gold standard as an editor, publisher, educator and community leader.” “Acting with empathy and decency, expressed countless times in public and private, she became a unique force for good in the institutions and communities she served.” Tryon said that McFarlin showed incredible trust in her employees and gave them considerable latitude, but also demanded accuracy, fairness, collaboration, and accountability.

Most importantly, she was one of those rare leaders who always referred to her employees not as subordinates or direct reports, but “colleagues” who “endeavored to hold themselves to high standards, not out of fear, but because they did not want to disappoint her. Diane was our leader and boss; she also was our guide and role
model,” Tryon said. “Diane belongs in the Hall.”

In early 2013, McFarlin returned to her alma mater, the University of Florida, where she was also inducted into the Hall of Fame in 1999, to become the dean of the College of Journalism and Communications. Under her leadership, enrollment increased 14%; staffing grew to 72 research and professional faculty and 20 teaching professionals in an immersion-learning environment; and the College’s endowment increased 25% to more than $70 million.

McFarlin was active in many state and national media organizations, including the Florida Press Association and the Southern Newspaper Publishers Association. She is a past president of the Florida Society of Newspaper Editors and the American Society of News Editors and served six times as a juror for the Pulitzer Prizes. In addition, McFarlin served on many community non-profit boards including the Greater Sarasota Chamber of Commerce (past chair), United Way, and the Community Foundation of Sarasota County (past chair). In September 2019, Florida Trend Magazine named her to its Florida 500 list, highlighting the 500 most influential executives in the Sunshine State.

We use cookies to optimize site functionality and give you the best possible experience. By continuing to use our site or by clicking 'Accept', you consent to our use of cookies. To learn more, please see our our Privacy Policy.Accept